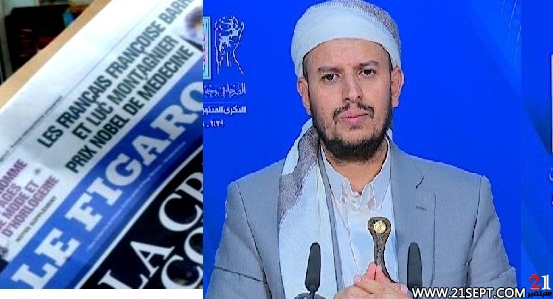 The leader of the revolution, Mr. Abdulmalik Badr al-Din al-Houthi, that many Western countries deal with the problems and wars of the Arab region from the angle of interests and material gains

Mr. Abdelmalek pointed out that France has a bitter experience with events that targeted its security by al-Qaeda and is therefore making a mistake by standing with Saudi Arabia and the UAE in support of al-Qaeda and

He continued in his interview with the French newspaper: “The Yemeni people do not mind having a positive relationship that respects their right to freedom and independence with other countries except” Israel “

And expressed his readiness to stop the rocket attacks on Saudi Arabia and the UAE if the air strikes on Yemen. He also said: Our acceptance of the initiative of the UN envoy to expose the forces of aggression and expose the falsity of their claims